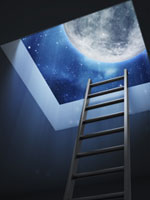 Occurring on March 1 and March 30, the New Moons in March are each linked by a chain adorned in planetary energy that both supports and magnifies their messages. If you want to know what to expect from the two different moons, you also need to understand what else is going on around them so that you know how it all will affect you.

The general energy of a New Moon is positive. It’s a time to be still for a moment and gear up for new beginnings. It’s about happily letting go of what doesn’t work and then making room for new, fresher energy to move in.

The Pisces New Moon of March 1 opens up the book of our subconscious. This New Moon and the Sun in Pisces form a conjunction with Neptune, the Piscean ruler. Now, more than ever, it’s time to let our imagination and intuition guide us. Writing down your dreams is always a good way to see what is unfolding in your subconscious. If you go back periodically and read your daily entries, it reads like a journal of what is happening in your life and it can give you clues about how future events might unfold in real time.

Pisces is a water sign—fluid and drenched in imagination. You may tend to be more passionate, intuitive, creative, social, and sometimes erratic and mysterious.

When the Sun turns to Aries mid-March, it is not only the beginning of spring but also a new astrological year. When the New Moon in Aries enters the night sky on March 30, it’s time to take all of the dreams and visions we’ve experienced during the month of March and translate them into actionable steps. Again the Sun and the Moon combine to support a [Click to Keep Reading]

[Sorry this is arriving after the first New Moon of March, it got published a little later than expected … still, hope it helps.  Thanks for reading my blog.]

2 thoughts on “New Moons in March: What to Expect from two Different Moons”