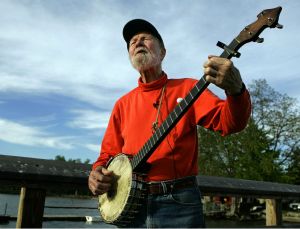 I’m veering off of my typical type of blog post today – my brother just sent me an email with the saddest news:  Pete Seeger the great American icon/folk singer/activist passed on this morning.

Since my brothers are about ten years older than I, I had the chance to be exposed to a whole generation of free spirits and free thinkers – to me, my brothers were hippies.

My generation was a little more TV- and material-based than my brothers’ generation – but in the moments when they weren’t teasing me or trying to get me to leave the family room so they could hang out with their friends in peace (without their annoying little sister to bother them), they really took the time to expose me to some great music, and they shared with me a lot of the spirit of their generation.

Maybe I didn’t appreciate it as much then as I do now, but it became obvious to me that people have to continually speak up and stand up for their rights and also that people who were passionate and vigilant about a cause would always go to any lengths to make sure that no one forgot what they saw as truly important.

Pete Seeger was obviously one of those freedom fighters and visionaries – passive and passionate; he captured the hearts of many people over many generations through his music and his presence.

As a New York-born girl, I feel like we’ve lost not only a great man, but a great New Yorker who fought for the cleanup of the Hudson River among his many causes, and he never let his passion waiver.

As I read the article (link provided below) about his life, I read about how he lost his wife this past July.  Another feeling struck me – how people who truly love each other often follow their spouses into the afterlife soon after losing them.  It’s something I’ve witnessed in my own life many times.  Pete Seeger was an American icon, it’s true, but he was also a man who undoubtedly missed the love of his life so much that he couldn’t wait to be with her again.  It’s rather a romantic notion – another validation to me that true love never dies.

I encourage you to read this AP article about this incredible man who marched for his beliefs all the way to the end, joining in the Occupation Movement in New York – walking for miles aided by his two canes.  It’s people like this that make you want to get up off your ass and stand up for the important things in life.

He will truly be missed and I can only hope that there are more like him out there and that the fight for freedom and the well being of our planet and its people will never die.   It’s a reminder that we should never become too passive, too complacent or too comfortable in our own lives that we fail to see beyond the borders of our own backyards.

Some sad news to report overnight. The family of Pete Seeger said early Tuesday, January 28, 2014, that the famed folk singer and activist has died in New York at the age of 94.

Read the story of his full and passionate life here written for AP by CHRIS TALBOTT http://abclocal.go.com/wabc/story?section=news&id=9409712